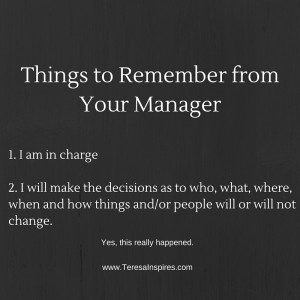 It’s often easier to identify ‘what not to do’ when leading than to articulate what makes great leaders effective. Here’s a prime example of ‘what not to do’ from a real live client I attempted to work with a few years ago.
My client, Power-seeking Patty, had some challenges with the people she managed. She decided the best way to handle it was to send a memo to her team with the following title and subsequent bullet points:
Things to Remember from Your Manager

As you can imagine the rest of the memo didn’t win her any points. How much influence do you think Power-seeking Patty had with her team? Combine that with the fact that she was not coach-able (that’s a surprise, right?) and you have a recipe for dysfunction and turnover.

Let’s take a look at 8 things great leaders do differently:

Where do you fall on this list? Is it time to hold up the mirror and challenge yourself to enhance your leadership skills? It’s never too late to be the leader you might have been.

“Leadership is the person you are and the influence and impact you have on other people.”
James Hunter
“Remember your leaders, who spoke the word of God to you.”
Hebrews 13:7a