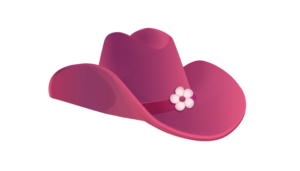 Our family loves to pull out our cowboy boots and hats and go horseback riding. Since we don’t own horses, we occasionally go to riding stables to get our horse fix. When the girls were seven and ten, we decided to go for a morning ride at a stable near our lake cabin. The girls were super excited, but their excitement gave way to frustration as their focus turned to who was wearing which cowboy hat. The prior year, they had each gotten a new cowboy hat – one was pink and one was orange. Yes, pink and orange cowboy hats. I certainly don’t recall whose was whose, and apparently there was a trade that occurred at some point over the winter. Well, there we were, trying to get on the road on time and the girls are arguing about who gets the pink cowboy hat.

Seriously! I recall trying to interject with the voice of reason about how insignificant the argument was but it fell on deaf ears. In fact, the arguing escalated and my husband issued an ultimatum; quit arguing and get in the car or we won’t be going horseback riding! (Ouch, that would have been punishment for me, too.)

Thankfully, the girls understood how serious we were, so the arguing stopped and we were on our way. When we got to the stables, we were welcomed by the owner of the stable. What she said as she greeted the girls was priceless: “Girls, you look adorable in your cowboy hats, but you won’t be able to wear them – we require riding helmets.”

“For where your treasure is, there your heart will be also.” Luke 12:34